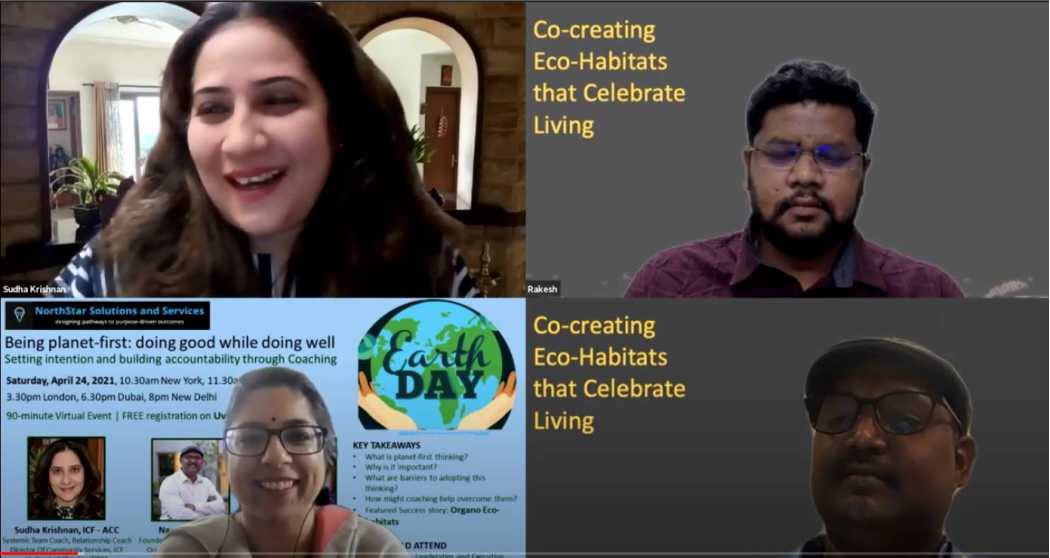 What is planet-first thinking? Why is it relevant now more than ever? Meenakshi Iyer Founder of NorthStar Solutions and Services & Personal Agility Coach organised and hosted a virtual coffee meet on Earth Day.

Nagesh Batulla — Founder & MD of Organo eco-habitats, discussed setting & building accountability through coaching. Joining the discussion was Sudha Krishnan from ICF-ACC, India. This blog gives insights on the main takeaways from the discussion.

E-commerce in the US resulted in the felling of a million trees every year!

Half a liter of soft drink or aerated drink requires 35 liters of water!

It's rightly said that earth is not inherited from our ancestors but borrowed from our children. We share this planet with millions of other species. And it's critical to understand & ensure that all species continue to inhabit this planet — and not become extinct.

Nagesh is architecting and envisaging Organo's vision with the planets & IGBC's. They've taken up the challenge of developing eco-habitats in harmony with nature.

"We promote the 'Rurban' way of life with an integrated alternative-living experience," says Nagesh.

Nagesh added to the role of coaches in advancing planet-first thinking. He said that coaches inspire people and can make a difference. He pointed out how humans shifted their focus from the environment to only financial progress.

Being a consumerist is the core problem of the nature-human conflict. This selfish interest should be refocussed on balancing eco-systems to reside in harmony with other species on the planet.

Professor Prof Peter Hawkins is an international pioneer in leadership. This model focuses on how humans lack awareness and are unable to recognize the different parts of the ecological system.

Hawkins believes that the process is only a part of a deeper human pattern of consciousness. It's a capacity that resulted in many positive developments for humanity through our species' short time on this planet.

There's a need to adapt from models like this and change the general mindset in relevance with sustainability. The planet-thinking mindset shift is the focal point of Organo

"In my family, my wife loves gardening. Wherever possible, she would do gardening & grow vegetables, fruits, etc. Being a housewife is her choice. She loves spending time with the kids, pursuing her passion for gardening, and taking charge of the house. But this gives her happiness -- and in turn, this reflects in every facet of our life," says Nagesh.

He explains that often people just search for materialistic pleasures where peace & happiness is very limited. It's usually spending time with family on weekends, while rest of the week -- everyone is busy!

Laying the foundation for Organo

Nagesh was observing the real estate industry along with a drastic shift in the way people live. However, he continued to feel a void in his professional life. Rather than just designing spaces that are not serving or doing the planet any good -- he shifted his focus towards sustainability & environment-friendly architecture.

While CSR was always an option, he wanted to do something more. He wanted to make a difference. He started focussing more on the triple bottom line thinking of - - people, planet & profit.

And that's when it struck him that he could design living systems that could create a harmonious eco-system -- while providing a balance of urban & rural facilities.

What is the triple bottom line?

According to Nagesh, simply put, the triple bottom line is integrating the lifestyle of our forefathers & ancestors. A time when agriculture was not a business but a culture. Today, it's the other way round.

Organo hopes to reverse this culture. They want to bring back the importance of agriculture. A culture where:

Nagesh's design team, colleagues, and coaches like Sudha Krishnan supported him in this endeavor to start Organo. For him, Organo became a purpose. Something he looked forward to every day.

The end result was a real estate venture that made him happy from within. Nagesh put together a team that had a vision that aligned with his. For him, Orgnao is an intention to bring an all-inclusive business thinking and mainstream it. A shift from the standard industry paradigms.

Rakesh Koti - Head of Sustainability - Organo emphasizes that the idea of self-preservation precedes all other instincts. And Organo capitalized on this idea to strike a balance between sustainability and modern conveniences.

According to relationship coach Sudha Krishnan, even isolated acts by individuals could make a huge difference. She believes that when discussing the future of work, the focus on technology takes away the attention from the people. Making a difference

There are areas where the land will soon be overtaken by water because of rising sea levels — islands that will be completely wiped out!

Krishnan talks about an island in South-East Asia where the inhabitants were suffering from malaria. They called the WHO (World Health Organization) for help. WHO sent supplies of DDT to control malaria.

But what happened next was something no one imagined...

Using DDT, malaria was controlled, but the side effects were that other organisms were killed too — leading to chaos in the ecological balance.

For Organo, the planet & people come first. As an architect, this inspired him to create homes focussed on eco-living. Habitats that celebrate nature every day! Everyone working at Organo is aligned with this vision.

If you want to know more about our initiatives visit: https://www.organo.co.in