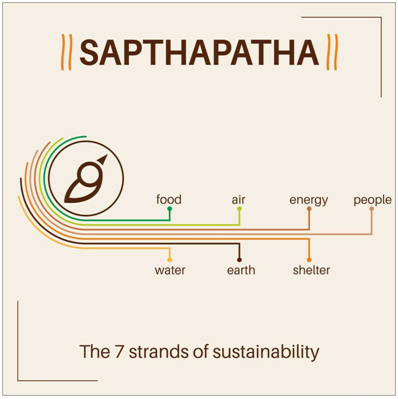 There were many issues during the execution of the Earth Air Tunnel Draft than what we had anticipated. Adding to it, there was a gap in our marketing communication, which created an unrealistic expectation. We realized that we we’re not specific that the Earth Air Tunnel Draft lowers temperature considerably but does not function as a replacement to an air conditioner. This made us realize how important it is to communicate in detail, especially in the context of a sustainable community. Post excavation, the fume pipes collapsed after installing them in the ground. We had no other alternative but to disturb the land were organic farming was underway, in order to remove them. We not only lost money but also time and we had to install new pipes. Handling so much excavation, keeping that soil, refilling, consolidating, adjusting, benching etc. were tedious processes and new learnings for us. We learnt that it wasn’t worth the effort for the amount of time and money we had spent on installing, uninstalling and reinstalling.

From the customer point of view, they need not spend so much money to get temperature reduction of 6 to 8 degrees Celsius when there are more affordable options available alternatives.

Rather, air-coolers worth 45000/- for all rooms in the house could have given better comfort and are financially viable. Considering all these, we feel the Tunnel Draft would not be a successful plan. We recommend people not to go for this unless there is an excavation happening naturally, like a basement work which is already under construction and density is low, where one can take advantage of Tunnel Drafting.

As an alternative, we suggest focusing on best filling energy modelling where shading devices can make a huge difference. Even greenery on buildings would enable a drastic change in heat reduction. For example, if a creeper covers the building walls, it would give natural shading and actually cost nothing.